Today was the last day of our short break in North Norfolk.  After yesterday\’s miserable rainy day (although we did have some fun and shopping!) this morning was a glorious, nearly clear blue sky, day.

We breakfasted and moved out on our way home.  By dint of staying in a Holkham Estate hotel we got a free pass to the Lady Anne Drive car park opposite the Victoria Inn near Holkham Hall (although to be honest with so few people about, we probably would have got away without a ticket!).  Drive down to the parking places we looked to our left and suddenly realised that yesterday\’s 1,000 goose skein appear to have settled to feed on the field adjacent to the drive, along with a few thousand others.  Despite the cold we stopped and wound down the window and listened to the gentle honking of the geese.
Parked, we started to prepare for our near Arctic expedition. Without any apparant reason the geese all took off and moved field.  The sound and sight was simply amazing.  Sadly i had no decent camera with me, but the phone\’s camera had to do, and did a decent job.

Then, we set out across through the pines to the dunes and hit the sand.  The sands and beach were rock solid. The cold weather had completely frozen the beach – but there was a residual amount of sand whistling through the air at a few inches above ground as the cold arctic air flew in from the north.  As we looked we could see a few miniature sand dunes forming and building as per 1978 Geography O Level course notes!  In places they were perfect crescent shapes.

By now we were well out towards the sea (probably over half a mile from the trees) and wer still totally alopne on the beach.  This is a rartity to say the least.  We often come here on Boxing Day or New Year\’s Day and however cold, there is always a large turnout of kite flyers, dog walkers, hungover walkers, recalcitrant children in tow, but this time – we were really on our own.  But with a windchill that was about 15 or more degrees Centrigrade, below, I guess we were the only ones bold enough to brave the weather.

Eventually reaching the sea I was somewhat disappointed to find there were no indication of ice in the water.  Optimism defeated

As the picture below shows, it was damn cold out there, and despite wrapping up really well, we could do nothing to keep our noses and cheeks from freezing! 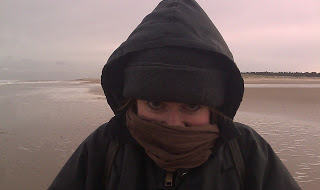 Returning having dipped our toes in the water, we saw more of the shifting sands, and returned to the location of our big arrow in the main dune (done to show our way back),  Mrs B was astonished to see that the main line of the arrow (dragged out by our feet) was already filled in with the blown sand – even though we\’d only been out for 10 minutes or more.  At this point I was about to take another photo, when my phone rang.  Now, Orange, how come you can get a phone call to me at least a mile from civilisation and whilst nearly in the North Sea, but you cannot manage to deliver a signal within 1.5 miles of a mast, and in a populated area? 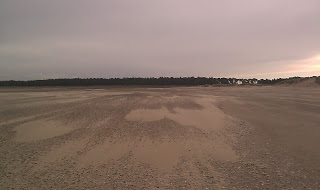 Finally, returning close to the trees, we marvelled at the crystaline nature of the frozen sea water in the patches of ice in the channels through which the entire marsh area would later be flooded. 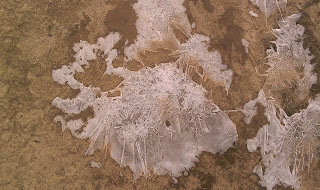