At the beginning of the year when (after about 30 years off the bike) I started training for the Help For Heroes Big Battlefield Bike Ride my early runs barely left the house and left me knackered!
As a sharp winter evolved into a wet, cold, breezy, spring my training runs extended and I took in a stretch of country road (1 car wide, no road paint, poor surface) alongside a stretch of river. Within a few weeks I spotted a couple of swan who had setup a nest and were caring for 7 eggs.

Although most times I would whizz (well, whizz-ish) by on a few occasions I would stop and take a few pictures – more interesting as the nest appeared to be mobile and was to be found anywhere in a 2-300 yard stretch of the river.

A couple of months later and just before the bike ride I returned to that part of the world (my routes had taken me further afield) to find that the eggs had hatched, and seven string cygnets were heading for the water to swim with ma & pa; however their necks were still too short to bottom feed – so they would nibble on the bank\’s grass before setting off.

A month or so, 350 miles, 10,000 feet of elevation and £3,000 of fund raising later…
I was passing the river again stretching my legs after an fortnight off the bike to commence my preparations for the H4H Ride to Recovery at Colchester in September. I was pleased to see the family about and all able to bottom feed. Perhaps not surprisingly the cygnet count was down by 1 – I guess that\’s probably a success against average attrition rate. 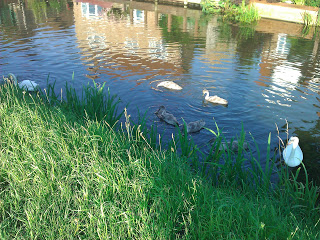